Whether it be English, Japanese, German, Lithuanian or any of the other 7000 languages spoken, there are some fascinating similarities between these languages. It’s amazing to think that, across our little globe of 7.5 billion people, there are so many languages out there, so naturally there are bound to be some crossovers between them. Here are 10 every day English words that may fascinate you to learn of their actual origins!

1. Kindergarten – Ah, such fond memories of finger painting and jumping jacks. Kindergarten is actually a German word that we now use in English, literally meaning “Children’s Garden”. It was coined back in the 1840’s and relates to the concept of a caring environment where children are nurtured and tended to (like plants in a garden!).

2. Mosquito – Yes they are pests and they are everywhere and this word is used quite frequently during the Summer months. But it was the Spanish who named these little flying needles – Mosquito means “little fly”!

3. Sofa – The place where Nanna parks herself for the day when she comes to visit. This word is actually taken from Turkey, meaning “an area of the floor that is raised and covered in cushions and carpets”.

4. Cookies – The Dutch have given us this cute name for “little cakes”, or as they say, “koekjes”!

5. Air – This word comes from the Greek word, AER, and we also use “aer” in its original form in the English words of aeroplane and aerial!

6. Ombudsman – Have you ever had to make a complaint about a business to an ombudsman of some kind, such as the “Small Business Ombudsman” or “Telecommunications Ombudsman”? You are actually using a Norwegian word that stems from an old Norse word. It exists in slightly different forms throughout Scandinavia also.

7. Ski – Another Norwegian word we have adopted into the English language, used to describe the “sticks of wood” one would use to traverse down a snowy mountain. Although in Norwegian it is actually pronounced “shee”!

8. Banana – We have likely all had a banana in our lives (dur!). Perhaps you are eating one while reading this, in which case good on you for getting your daily dose of B vitamins! It may interest you to know that this word has West African origins, and was likely brought to English via Spanish or Portuguese languages. 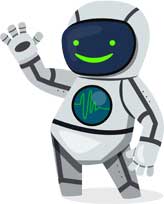 9. Robot – This word only really came into speech in the early 1900’s via a Czech playwright (Karel Čapek) as it was introduced in his play, R.U.R (Rossum’s Universal Robots). This play, translated into 30 languages, introduced us to the concept of robots and science fiction in general.

10. Noodle – This last one is a fun one! I bet you can’t guess. It’s actually German in origin, from their word nudel, which means a string of pasta.

If you know of any more “borrowed” words, please feel free to share with us and enlighten us all!

Our skilled website designers have over 17 years experience in creating clean, modern and easy to use websites for your business. We WILL NEVER sell you things that you don’t need – our honesty and transparency means we will only suggest things that we know will help your website!

Enter your details below and we will call you back at a time that’s suitable to you!